Starbucks secret menu items have been hitting the internet left and right lately but as far as actual drinks ON the menu, they have pulled back this holiday season. That included getting rid of my personal favorite Christmas drink, the Gingerbread Latte. Rude.

There’s a new drink on the menu and it’s unlike anything they’ve ever had before because it has one strange ingredient. Potato chips.

According to Delish, this new drink is called ‘Santa Boots” and the addition of potato chips is to give you the sweet and salty combo that so many people love. The rich chocolate base has even more chocolate ingredients mixed in and is topped off with crushed up potato chips, whipped cream and a cookie straw. 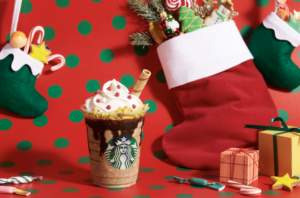 What’s the catch? It’s currently only available in JAPAN!